Eternal Vows / Shall we date?

The heroine is an ordinary student. One day, she finds herself got thrown back in time to an old era, about 500 years before, known as the “Warring States” period. She meets ninjas who are fighting and risking their lives in major battles. A bitter-sweet story of love beyond time found between the heroine and the ninjas is now about to begin!! 1. Story Introduction The heroine of this story is an average student and a member of her school’s archery club. In a sudden twist of fate, she finds herself leaving her uneventful life behind, being thrown headlong through time to medieval Japan. In this time, known as the “Warring States” period, continued civil war ravages with no end in sight. She appears in this time right at the feet of Masatora Uesugi, later known as Kenshin Uesugi. Masatora takes an interest in her bizarre clothes and way of talking, brings her back to Kasugayama Castle and places her under guard of the “Nokizaru”, a unit of ninjas. Although life in this war-torn era is not something she has ever expected up until now, she does her best to stay positive. She finds a place for herself by connecting with the people around her, eventually understanding and feeling the importance of the bond with them. 2. Characters *Akatsuki (Nokizaru): The prospective head of the Nokizaru. He sounds overbearing, yet is straightforward and considerate in nature. He cares about his comrades, and once he trusts someone, he takes care of him or her for life. *Suien (Nokizaru): A man with a laid-back personality who is kind to anyone. He loves playing the flute, and teaches his knowledge to children. *Shuya (Nokizaru): A man of few words. With a dead-serious personality, he places orders before all else, yet takes good care of the younger ones. He also plays an important part as a chemist. *Masato (Nokizaru): He is a strong and skilled man above all, and is acknowledged by others. Ever since he first met the heroine, he somehow places a distance between himself and her. *Yataro Kojima (Captain of the foot guard of the Echigo Army): A massive man who serves Masatora from a young age. He is friendly and watches over the heroine along with his younger sister, Princess Aya. *Kanehisa Togi (The former master of Nokizaru): A man with a very strict personality. Only partially retired, he continues to assist the young Nokizaru. All of them stand in awe and respect him. *Kansuke Yamamoto (A strategist of the Takeda Army): A man of mystery. Although he serves Shingen Takeda for many years, he looks ageless. He takes an interest in the heroine and tries to approach her. *Rurimaru (Nokizaru): A bright and energetic boy, loved by everyone. He is not skilled enough yet, and is treated like a younger brother by others. He gets along well with the heroine like brother and sister. 3.FOLLOW US facebook.com/ShallWeDate.NTTSolmare (Don’t forget to LIKE us if you enjoy our games!) youtube.com/user/ShallWeDate 4.ABOUT US Thank you very much for your interest and downloading our games! NTT Solmare is a game company especially focusing on bringing Japanese visual novels and Otome games to the world! Eternal Vows -Love beyond time- is one of the titles from our game series, “Shall we date?”. We sincerely hope you enjoy our games and give us feedback! 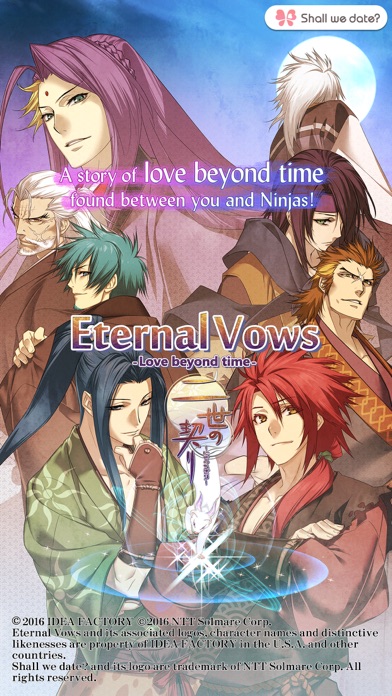 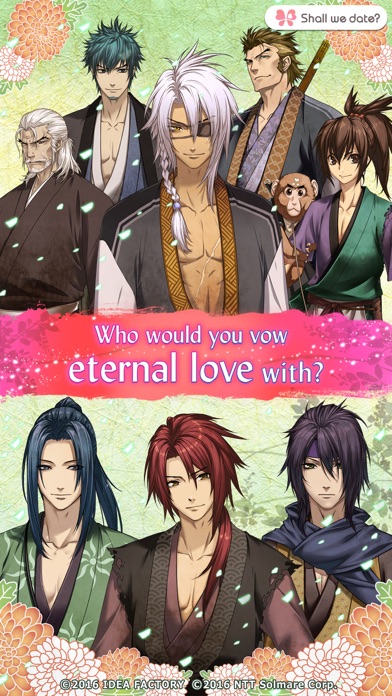 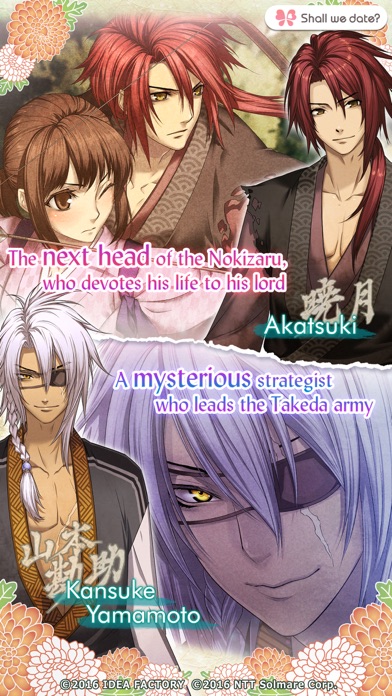 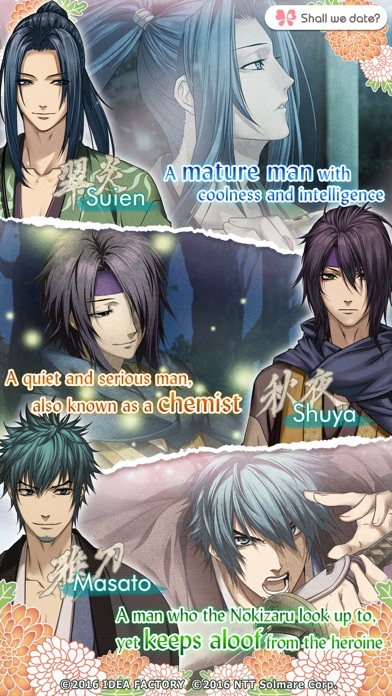 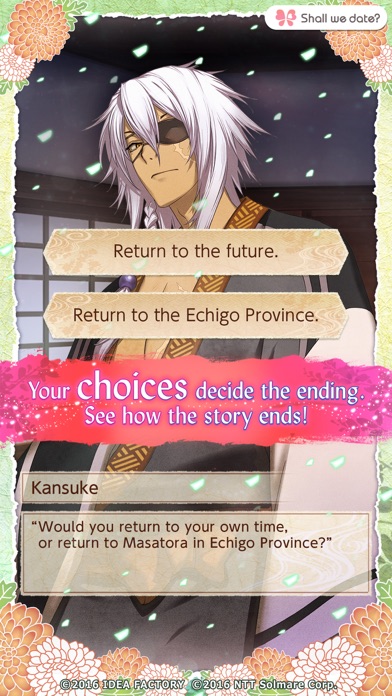